Of Montreal: The Case for Satellite Offices 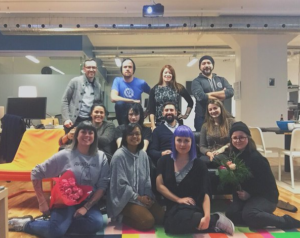 When Unbounce launched a Montreal office in the spring of 2014, it was a big deal. Georgiana, our long-time Director of Marketing, announced she’d be moving back to her hometown to lead the troops. Oli, our globetrotting frontman, would also base himself out east to help spread the Unbounce culture to La Belle Province. Rick, our trusty CEO, wrote an Inside Unbounce post explaining the decision to plant the Unbounce flag in Montreal and flew out to host our first open house and introduce Unbounce to the local tech community.

Since then, more than 100 amazing people have joined the company and Montreal’s ranks have swelled to a baker’s dozen (modest in comparison to Vancouver’s numbers, but still a 4x increase from where we started). Meanwhile, the reason for opening shop here in the first place has faded into folklore. Some of our colleagues in Vancouver work with the Montreal team every day, while others only get to hang (and, inevitably, sing) with us when we make our annual pilgrimage to the Call to Action conference. Because cross-country communication can be challenging and – yes –  frustrating, it’s easy to wonder whether opening a second office was worth the headache. I’m here to confirm that having an office chez nous has been a boon for Unbounce’s business and culture in multiple, (perhaps) surprising ways. Let me explain.

Bringing communication to the fore

It’s easy to assume that because you sit next to a group of people every day and play on the same dodgeball team, you’re all naturally on the same page. But communication takes continuous effort and empathy. It requires having enough confidence and trust in each other to deliver and receive feedback, and having the right structures in place to do it. It’s easy to overlook this when you inhabit the same space, but it’s impossible to forget it when your team is split between two provinces and time zones.

When it comes to communication, Montreal keeps Vancouver honest. Having two offices keeps us accountable to our core values (Transparency, Empowerment and Humility all come to mind) and incentivizes us to use tools like Slack, 15Five and Crystal to keep everyone in the loop and articulate our processes, standards, problems and opportunities. It doesn’t let us take anything for granted.

Having distributed teams that need to coordinate across time zones is indeed challenging and, at times, frustrating. Technology is imperfect and scheduling meetings can be near impossible at times. But I believe these challenges pale in comparison to the positives. It’s worth noting that, according to Google’s extensive research on team dynamics, co-location is not a factor in whether teams are high-functioning or ultimately successful. On the contrary, I believe distance forces teams to better define and articulate what they stand for and where they’re going. And that’s a wonderful thing.

Unbounce has an amazing company culture, which stems from our co-founders, our leadership team and the mission, vision and values they’ve instilled.

That said, it’s easy for any strong culture to become a victim of its own strengths. Taken to its extreme, consideration for people’s feelings can lead to conflict aversion. Likemindedness can become groupthink. “Culture fit” can become code for homogeneity.

A satellite office is a safeguard against slipping toward one of these extremes. When you live 3,000 miles away and only visit the mothership a few times a year, you notice norms and patterns that may be invisible when you’re in the bubble day in, day out.

It’s easier to identify areas of weakness, opportunities for improvement and, when necessary, call BS. It’s like that out-of-town relative who comes to visit for the holidays and notices who’s lost weight, who’s greying around the temples and what rooms need to be tidied up. It can be jarring at first, but it keeps us honest and on our toes.

Of course, a satellite office will also develop a unique culture of its own. Unbounce Montreal is unmistakably Unbounce-y, but it also has a certain homegrown je ne sais quoi. We have a questionably healthy obsession with party balloons, ice cream sandwiches and karaoke. We have weird nicknames for each other and a whiteboard full of quotes, inside jokes and talking points for the podcast we record for our colleagues in the Vancouver office (yes, this is actually a thing).

We have our own norms and habits, and when we cross-pollinate with our Vancouver colleagues wonderful and unexpected things happen like this “Dejargonator” Chrome extension, created when a few Vancouver-based developers came to visit for Ship-it-Day, along with this utility closet hack:

For #shipitday@haaf and I converted the closet into MySpace. @myspacetom welcomes you to quiet work! #unbouncingpic.twitter.com/QLApqtJKlr 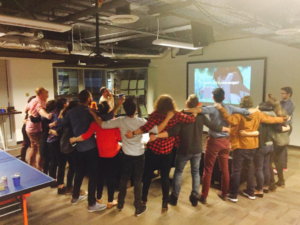 The Montreal team visits Vancouver. Can you feel the love?

On a more practical level, having a satellite office deepens the pool of quality people you can bring into your company.

Montreal is Canada’s second-largest city, with 3.5 million people, four major universities and dozens of trade colleges that churn out technical, design, communications and management talent year after year. We also have a bustling (and bilingual!) startup scene that includes fast-growing companies like Crew/Unsplash, Frank & Oak, Breather and Flatbook, not to mention dozens of successful digital marketing agencies big and small. Montreal also hosts Startupfest, the premiere startup industry conference, which attracts VCs and startups from around the world every summer.

It may sound obvious, but if you want to build a company stacked with “A” Players, you may need to cast your net a little further afield. 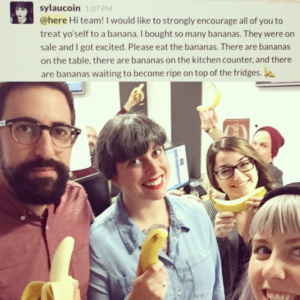 Dipping our feet into international waters*

Quebec, as we like to remind people, is a distinct society. We have complicated language laws, abide by the civil code, file our taxes provincially, kiss people on both cheeks when we meet them, put vinegar on our french fries and celebrate our own “national” holidays.

Navigating this stuff is tricky (just ask our business ops team!), but it’s excellent practice for a company with international ambitions. If you think a three-hour time difference and some cultural quirks are difficult to overcome within the same country, try setting up shop in Europe, Latin America or Asia.

Unbounce has committed to expanding our operations globally over the next couple of years. We already have a full-time marketer in Berlin and have people dedicated to the Spanish-speaking and Portuguese-speaking markets. It’s only a matter of time before we open a third office somewhere much farther and more exotic than Montreal.

I was one of the first Unbouncers hired in Montreal and joined months before we had an official address here. I’ve watched the company grow by leaps and bounds – in size, revenue and maturity. It’s been an amazing adventure and I’ve been privileged to watch it happen from the inside –  but at a critical distance. I hope that sharing my perspective is helpful to my colleagues out west and to other companies looking to hang out their shingles in farflung places.