I included my name in the title because public speaking, and the long long journey it’s been to make it happen, is all about putting yourself out there.

Well. I’m out there. Kinda. 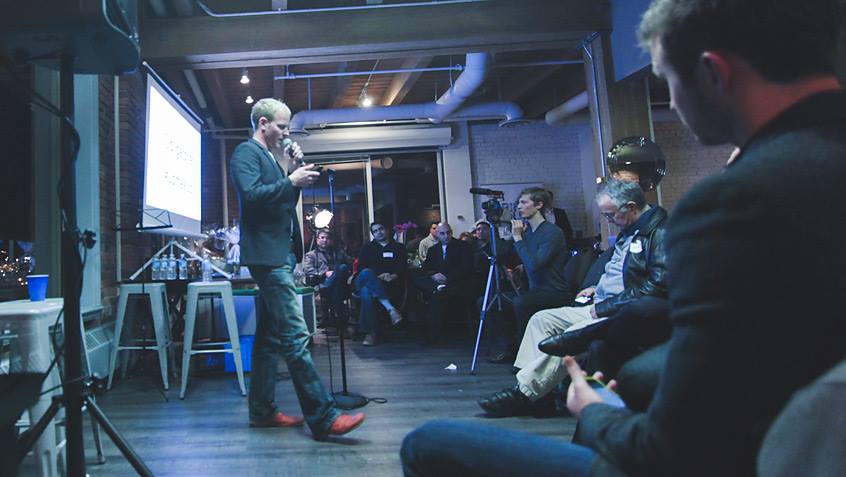 Since we started Unbounce, Rick and many others in the marketing world have been asking or trying to persuade me to speak. To get on the circuit or at least at a few conferences.

I was mortified at the idea right from the get go. No way. I’m a writer not a speaker. I speak through the blog, where I get to spend as much time as I like leveraging control-Z.

Orlando? No.
Paris? No.
San Diego? No.
How about a Skype interview? Nope.
Edinburgh (where I went to University!) Afraid not.
All expenses paid trip to Finland? Leave me alone.

Moz.com/blog? Definitely. (And yes Cyrus, I do actually have a 3rd post in the works. Epic, naturally.)

Why the hell was I turning down all these great opportunities?

I told myself – and others – that, we as a company were better off with me playing to my strengths and not worrying about the other stuff. There’s a certain logic to that. Except that it was utter horse shit. I was just scared.

I was afraid of being called out in public. Of being branded an impostor. Which would affect not only me, but our brand too.

I became a marketer the day we founded the company. I’d never done it before. And all of a sudden I was writing – and trying to define – marketing theory. 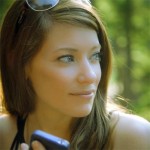 And then 2 years ago I hired Georgiana Laudi to be our Director of Marketing.

She’s the (tour de) force behind the marketing we do here now, which if I say so myself, defines badassery.

We shipped Gia (as she’s known around the office) in from Montreal to take what I was doing to another level.

Saying no to Rick’s nudges wasn’t so bad. We’ve known each other for 14 years, and can tell each other to fuck off and get over it pretty quickly.

But Gia was an entirely different box of candles. Good luck saying no. 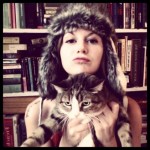 So I conceded to being the guest on one of our early webinars, about landing pages and PPC, as a co-guest with Anna Sawyer (then of Trada).

This was kinda awesome, because Anna is a rockstar, knows everything about PPC, is funny, charming, and did 80% of the talking.

As an aside, I was checking out her Instagram the other day and noticed that she *doesn’t* take food photos. Admirable – and made me look at mine (17% food shots). 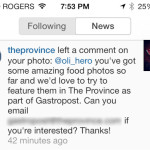 The world needs more Instagram photos of food as much as it needs more selfies from Chris Brogan.

And then (and I shit you not) as I sit here writing this post, I get a message on Instagram from The Province, a provincial Newspaper we get here in Vancouver, saying that they loved my food photography and would like to feature it in the paper.

That felt good because I put my dreams of becoming a wildlife photographer on hiatus when we started Unbounce.

The webinar was okay. I sweated a lot and felt uncomfortable the whole time, with no real recollection of it afterwards.

I’m an empath. I present my interactional dialog with others based on what I feel from them in return. (I need to see you to be able to relate to you.)

Talking at a mic makes me uncomfortable as there’s no feedback. Ryan does a great job as the host of our webinars. He makes things flow well, but a few slides in, I lose focus and typically start accelerating my speech and losing track of how to project something interesting.

After the event I’m relieved, but generally disappointed. That’s not how it should be. Let me be a writer. I feel good when I write.

I did another webinar after that one. About Conversion Centered Design – which is my thing! But still, I went into shock mode when I was faced with the mic.

At this point, I was even turning down Skype interviews because they were live and I was concerned I wouldn’t be able to answer questions.

Thing is, I said yes to doing those two webinars. But you didn’t know about my rider. A rider being the list of stuff you want backstage before you go perform (and afterwards).

I didn’t ask for groupies, cocaine, 11 white doves or a giant pleather sofa.

I wanted the questions in advance.

I consider myself a thoughtful and entertaining writer. That’s because I get to weigh my thoughts and make them entertaining. Put me in an interview, with live questions, and I’m utterly useless. Maybe that will improve as I go through this process.

So I’d ask everyone that was asking, if they could provide questions ahead of time. I still do it. It lets me answer questions in a way that’s actually insightful, and provides a lot more value to anyone listening.

When someone asks me a question when I’m nervous, I can’t connect to any of my knowledge or experience. I freeze. On the other end of the spectrum, Gia is amazing at thinking on her feet in an interview, something I admire greatly. And another reason why I was saying no all the time.

And then we decided to release an ecourse: an 11-part online course about landing pages and conversion. As I wrote the content for it, I got more and more convinced that it couldn’t succeed unless we took the content up a notch with some video. 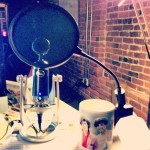 Again my fear dictated workflow. I had to wait until everybody left the office (cleaners too). Then I’d sit at my desk with a pretty sweet mic and do voiceovers for some screencasts. Two things I’d never done before. (Ryan helped a lot in getting the setup right).

And yes, that’s a One Direction mug holding up the mic. #itsryans

I pulled 16 hour days for two weeks to get the videos done, and in the process found my stride. At the start I was cautiously describing what was happening. By the time I got to video 5 of 9, I was recording a sassy signoff message at the end.

I’ve been Oli Gardner, and this has been the Smart Marketer’s Landing Page Conversion Course. I’ll see you next time when we’ll learn where you should shove your call to action.

Here’s one of the vids (it’s all voiceover screencast style) in case you wanna check it out. It’s good but not great. But a step in the right direction.

This is definitely the most important part of the story. Doing the audio for these gave me the confidence that I could speak as well as write, albeit with a ton of edits and several takes.

This was an *actual* turning point.

Joanna is one of the most special conversion-focused copywriters I know, she’s been an author on our blog many times, and is the founder of Copyhackers. When she approached Ryan (“Rye Rye” – they’re best buds) to see if we could contribute a video to her Fired Up And Focused Bootcamp, i’d literally just walked away from a discussion with Gia where she was bugging me about other speaking engagements and I finally just broke down and said…

From this point forward. Assume that I’ll say yes to anything.

We set up Ryan’s cam in the boardroom and I rocked it out in about half an hour. Several one take recordings and I was done. It’s hardly pro, but it’s supposed to be an honest instructional vid for startups. Here it is:

Then I started kickboxing

My very close friend Geoff Wilson got me to show up at a kickboxing class. After about a year of grappling in the bar and seriously pushing me to be a better person through martial arts.

It’s one of the best things I’ve ever done.

Subsequently, I had lunch with our coach Richie Yip, who’s a very special kind of communicator – his classes are amazing. We watched portions of my Joanna video over lunch at Steamworks (the pub below the Unbounce office). He watched my body language and gave me some valuable tips about confidence in general, and more specifically, for how to hold my hands while speaking. I think about his presentation style (and confidence) whenever I approach a camera.

My confidence was at an all time high

The old ‘will you do some public speaking’ demons were still asking “Can you get up in front of a crowd and speak?”. The answer was still a resounding no.

One of the things we needed to do was get the Unbounce brand/company out to the local Vancouver audience.

We’re known around the world as an online brand, yet many in Vancouver didn’t know who we were. Most assumed we were in San Francisco.

Last week we held our first ever Unbounce customer meetup. It was amazing.

And I was the headline act.

I was just the last person in the room to hold the mic (also with the smallest audience after 30% had left).

I had practiced the shit out of my presentation (I was going to critique a landing page), and after pacing the entirety of “The Landing” – the building we work in – I was as confident as I’ve ever been while faced with giving a talk in front of a crowd of people.

As the guy before me wrapped up his talk, I walked up to the stage shitting bricks, but took the mic confidently.

Ack. The wrong presentation was loaded up, we had to pause while it was replaced. No worries. I passed Rick the mic to fill some time while I scooped a sip of beer.

On my phone I could do 2 things: Run through the presentation, or “control” the presentation on another machine – something I’d very carefully set up for everyone earlier in the day. Swipe right for next, swipe left to go back.

So there I was, finally on stage speaking for the first time in my life (apart from a best man’s speech). Swiping in perfect synchronicity, loving my timing, until someone (I think it was Sarah) pointed out that the slides weren’t changing. Of course they weren’t.

I was sliding through the pres on my own phone, as opposed to controlling the pres on the laptop, with the crowd watching me talk about the awesome slides that they couldn’t see.

Five slides of me yapping on as everyone looked at the opening slide. 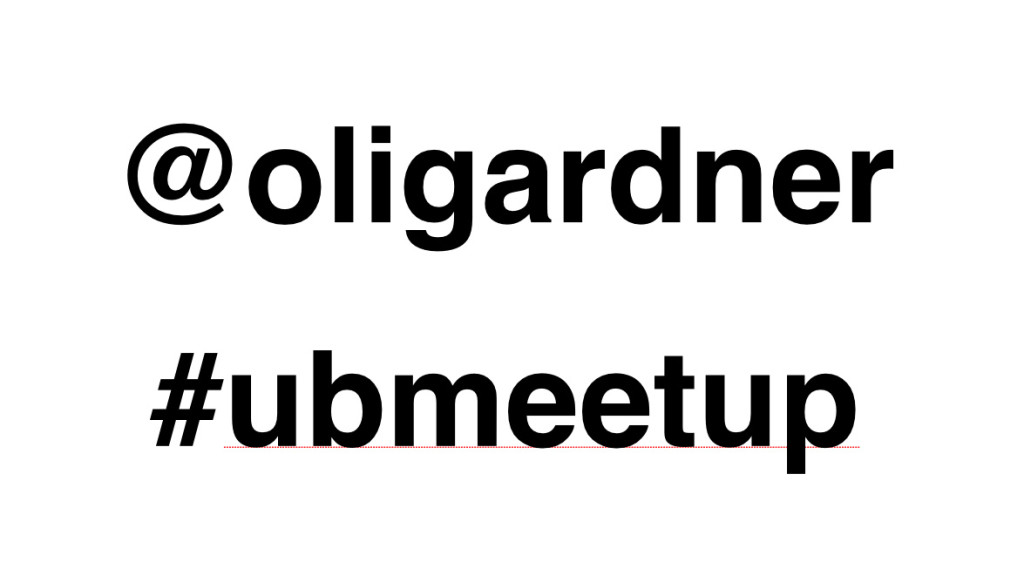 Not how I’d imagined it starting during my 20 practice runs.

But then I got into my zone. I ripped through a landing page critique, without being afraid of live questions. Dropped some F-Bombs, dealt with a heckler (you know you’ve made it when…), an adorably coherent chap who went on to threaten me after the show — “I’m going to f**k you up as soon as you leave tonight.” (Thanks for escorting that guy out, Carl << The Unbouncer).

For a few days after I was so high on the moment that I wanted to speak everywhere and anywhere. Mostly to make up for all of the things that went wrong.

Well now I get to be nervous all over again for our next meetup in Seattle in March.

Then shit gets REAL!

I’m on 2 panels at HeroConf in Austin in April. Moderating one, speaking on the next.

I’m scared, but also really excited because I’m actually close to being able to accept that I should be speaking in public. 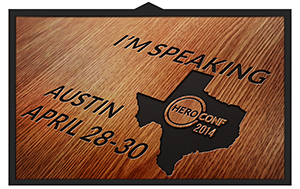 By Oli Gardner / In Category Team