Unbounce Attends The Art of Leadership for Women

As many of you might know from Rick’s last post on our Year in Review, Unbounce is trying a lot of new things this year–and one of them is increasing the work we do around gender diversity. We’ve made some great strides and I’m proud to say that Unbounce is now considering elements of gender diversity in the tech industry that a lot of companies (still) won’t dare touch. Some of these elements include significant parental leave policies, wage gap discussions and just putting more great women on our senior leadership roster.

There has never been a more important time to tackle and solve the long-standing gender diversity debate in technology.

I work with a hell of a bunch of strong ladies at Unbounce. I am so proud of each and every one of them and we’re all headed to great places. I am also really proud of the men at Unbounce who stand behind all of our women. Gender diversity discussions include them as much as they do us, and I’ve been so humbled by some of their conversations and realizations as we’ve started tackling hard issues. To top it all off, we’ve been making those hard topics transparent by hosting them within a permanent #gender-diversity Slack channel. All in all, great stuff.

As we’ve progressed in talking about issues around women in the workplace and gender at large, a lot of other very important (and tough) topics have come out of the woodwork and it’s so great to see how passionate Unbouncers are about making our company an inclusive place to work. These other issues are not forgotten, but gender diversity is a particularly hot topic right now.

One of the ways Unbounce has been empowering me personally is by encouraging me to develop my leadership skills. I don’t think it’s a secret to anyone that I’d love to be one of those senior leaders who sits at the almighty “table” one day, so I take every opportunity I can to grow and support others in doing the same. I was recently given the option of attending The Art of Leadership for Women here in Vancouver and I jumped at the chance for a seat.

Then, it was clear to me that there were going to be a few others who might also want to join me. The end result? 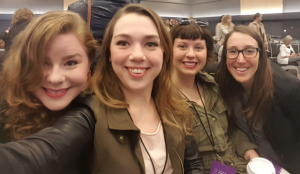 These three superheroes came along for the ride. I had the pleasure of spending all day in conference and conversation with Stef, Amy and Laura and we learned a few things about leadership as a female and about ourselves.

There were six talks over the course of the day at The Art of Leadership for Women and each of them approached leadership from a very different perspective. Diana Nyad, for example, approached her perspective on women’s leadership from the angle of never giving up and having the endurance to follow your passion regardless of the treacherous obstacles. Now, Diana, as you may know, is a champion long-distance swimmer who battled herself and some pretty terrifying ocean creatures to get to where she is today. Her beautiful storytelling ability brought her life to the stage and many were left in tears.

Danielle LaPorte, a native Vancouverite, took an entirely different approach. She opened her talk up with some words of wisdom but then let the floor drive the conversation by asking her a series of questions. Her outlook on life and leadership was motivational, spiritual and refreshing. Her most powerful takeaways included a question from an older woman in the audience who asked: “Danielle, do you ever feel like you’re not good enough?” To which Danielle replied, without skipping a beat, “Nope.” And that was the end of that conversation.

Stef, Amy, Laura and I got talking then when we broke for lunch. We started asking each other about how we could ask the hard questions about women’s issues and women in leadership at Unbounce. A specific moment of glory for me was when Stef asked me one of the hardest questions there is: “What do you think you’re good at, and what do you think you need to do better?”

I paused for a moment, wondering if I actually knew but the best part was that Stef and I realized we had opposite abilities and skill gaps. This prompted to us to make a pact to help each other with our weaknesses so that one day maybe both us could sit at the table by helping each other out. And women empowering other women is what it’s all about, isn’t it?

The rest of the lunch hour was spent discussing leadership as well as where Unbounce is headed. Our senior leadership team have been transparent about wanting more talented and capable women to take a larger presence in the upper management of the company and they’re working towards getting there. It’s important to realize that this isn’t an Unbounce-only issue, but one that ripples throughout all of Silicon Valley and its sister cities. I am so glad that we have acknowledged our gap in the representation of women in senior positions at Unbounce and that we’re conscious of trying to get more of us in the door.

I’m looking forward to the year to come. We’ve had some great women leave our company but a lot of other great ones have joined us as well. Personally, I’d love to see more leadership development for the women and the men at this company. We’re doing some of that now (which is awesome!) but it needs to be treated as continuous work. As with many other things, if you think you’re done achieving being a leader, you’re really just fooling yourself. Never assume you’re done learning.

Additionally, I’m looking forward to the continual conversations we have among all employees at Unbounce around gender diversity. We’re proud to be the ongoing hosts of the Ladies Learning Code Vancouver chapter, and the slack channel we have set up is constantly buzzing with news articles and discussions around sensitive gender-specific challenges. Awareness is half the battle–and we’re fighting it.

FInally, I’m looking especially forward to the day that there are women sitting in on our senior leadership discussions. The day will come, I’m sure, and I hope it comes soon. It is great when there is acknowledgement of the gap but it’ll be greater when there is a balance of strong women joining in the conversation to represent the underrepresented. To quote Justin Trudeau, why are we doing this? “Because it’s 2016.”

To all the ladies of Unbounce, keep up the great work and the conversation about who we are and what we represent for the future of the tech industry. I cannot wait to see what it holds for all of you.